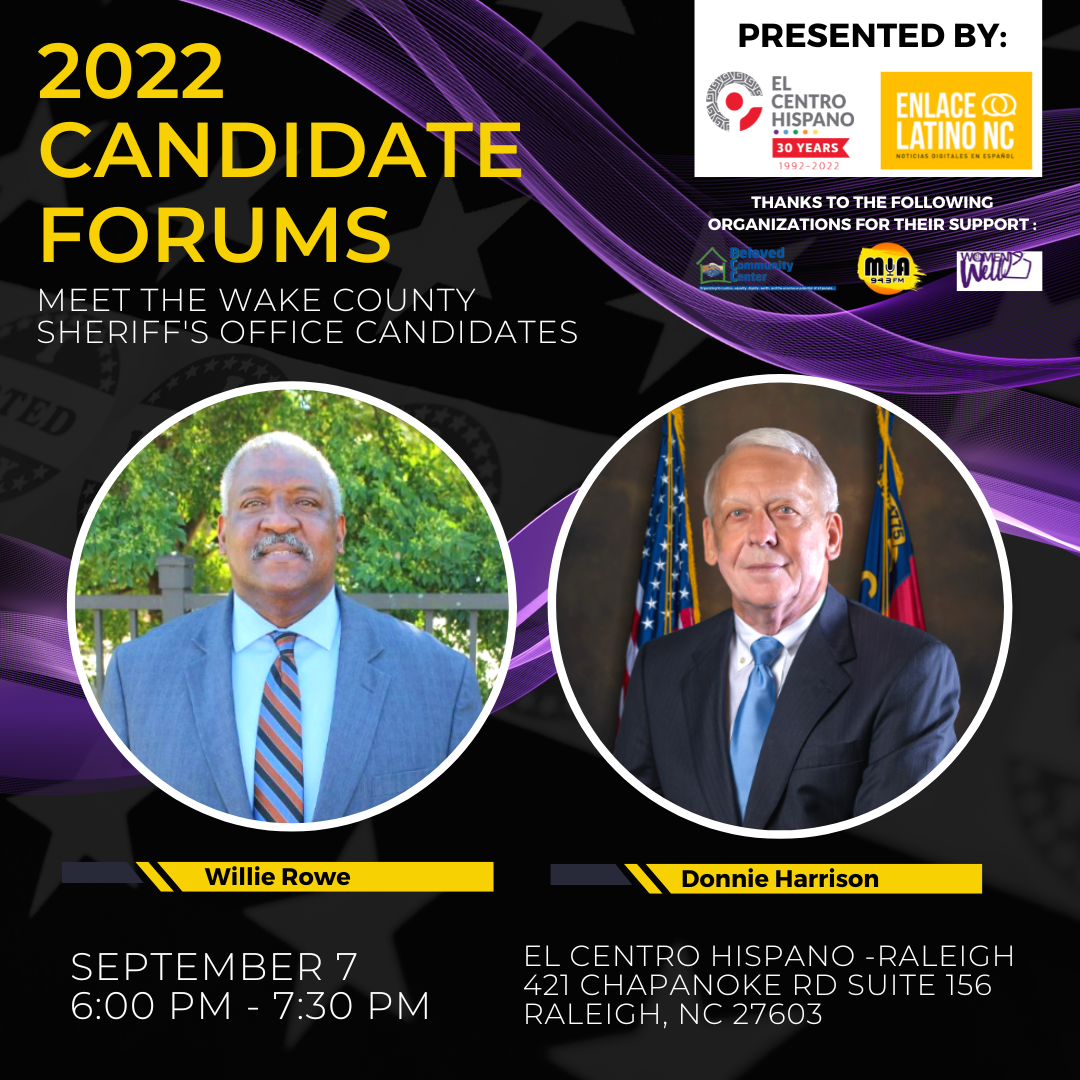 On Wednesday, September 7, a nonpartisan community forum will be held with the two Wake County Sheriff’s candidates.

The event will be conducted in Spanish and will be interpreted simultaneously in English and Spanish. Attendees will have a space to ask the candidates their questions.

Candidates Donnie Harrison for the Republican Party and Willie Rowe for the Democratic Party will answer a series of questions that were developed by the organizers, based on questions submitted by the community to the organizers.

“We invite our entire community to get involved, and make your voice heard. The position of sheriff is very important because this is the person who controls the county jails. In addition, it has the power to establish agreements with immigration such as the 287 (g) program,” said Paola Jaramillo, co-founder and executive director of Enlace Latino NC.

Jaramillo recalled that, in the past, this program put more than 12,000 immigrants in the county at risk of deportation. “It is the opportunity to listen to the proposals of both candidates and thus make well-informed decisions,” said Paola Jaramillo.

“Midterm elections are crucial and that is why the purpose of these forums is to help the community cast a responsible and informed vote that represents the well-being of their families.” said Pilar Rocha-Goldberg, CEO and president of El Centro Hispano. She also added: “It is an honor for El Centro Hispano to host these forums and ensure that the candidates’ conversations are accessible in the language that the community prefers.”

This is the first in a series of bilingual, nonpartisan forums recently announced by Enlace Latino NC and El Centro Hispano with candidates for crucial public office in this November’s midterm elections.

North Carolina and the country will hold midterm elections on November 8, which will define crucial positions at the federal, state and local levels. Within this framework, and for the third consecutive year, members of the Latino community will have the opportunity to participate in forums with simultaneous interpretation into Spanish to learn about the proposals of the key candidates of both parties.

In the remainder of the month of September and October, other forums will be held, face-to-face and virtual, with candidates for positions for the federal Congress, the Supreme Court of North Carolina and the mayor of the city of Raleigh, among others.

These community forums are part of the educational and informational campaign of Enlace Latino NC “Tu Voto es Poder” and are being held for the third consecutive year in conjunction with El Centro Hispano. This year, we also have the support of the Beloved Community Center, Women’s Well and Mia 94.3 F.M.